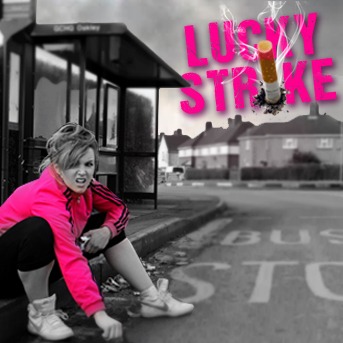 So like I said. I’m shit at life. I’m single, unfit, unemployed. But what is it they say?
Three strikes and you’re out? Well, I think my luck ran out a long time ago.

A vivacious, fast-paced comedy that’s full of filth. See this delightfully offensive Gloucester girl and her mucking fess of a life! Monologue Slam winner 2013.
‘Watch Meg Travers now so you can brag to your friends in years to come that you were at her gig.
They won’t believe you’
(Fraser Ayres, Co-Founder Triforce Productions Monologue Slam).

Meg Travers: Winner of the Monologue Slam UK, Meg was scouted and performed at London’s prestigious ‘Comedy Store’ in 2013. Her comedy writing went on to win her the Winner’s edition Monologue Slam at the Theatre Royal Stratford East, later that year. She debuted ‘Lucky Strike’ at the Canal Cafe & then the Brighton Fringe last year. Meg graduated from the Guildford School of Acting in 2012. Other credits include performing with The Femmes and has recently returned performing the role of Elizabeth on the International Tour of Frankenstein.
www.megtravers.com

Gemma Arrowsmith: Gemma Arrowsmith is a comedy writer/performer.  As half of double act Mould & Arrowsmith, she took a trilogy of shows to the Edinburgh Fringe.   Her first solo show Gemma Arrowsmith: Defender of Earth debuted at the Leicester Square Theatre before going on to the Edinburgh Fringe in  2012.  Her new show Everything That’s Wrong with the Universe will be at both the Brighton and Edinburgh Fringe 2015.
She runs the YouTube channel Sketches in My Flat and the SoundCloud channel Gemma Arrowsmith’s Small World. Her four part audio series  Gemma Arrowsmith’s Divine Comedy can be found on iTunes and AudioBoo.  She is a regular contributor to Susan Harrison’s Back Row podcast.
As an actor, Gemma has appeared in Merlin, Hustle, Charlie Brooker’s How TV Ruined Your Life, Dead Boss, Playhouse Presents…Damned,  Home Time and Paul Whitehouse’s Nurse amongst others.
For Children’s BBC, she has been a regular in DNN: Definitely Not Newsround, Hacker Time, Vic Reeves’ Ministry of Curious Stuff and Relic:  Guardians of the Museum.
www.gemmaarrowsmith.com

Tickets booked online must be collected 15mins before showtime. Cash tickets are available for 30 mins at the box office.
Over 18’s only, limited access for people with disabilities, no admittance for latecomers.