James Loveridge: Castles in the Sand 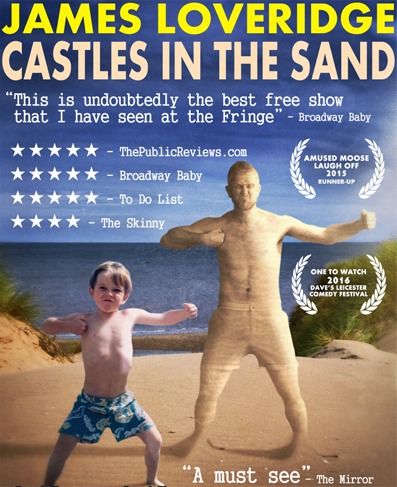 Ever had a memory so embarrassing you wanted to cry just thinking about it? Well James has and he’s dealing with it the only way he knows how… by making people laugh at him. Nominated Best Show, Amused Moose Comedy Award 2016 at Edinburgh Fringe.

BROADWAY BABY – ★★★★★
“Loveridge’s timing is exceptional; he knows exactly where in a joke to place the punchline. He often sets up the expectation that he will take the easy route out of a joke, then subverts this expectation to excellent effect…This undoubtedly the best free show that I have seen at the Fringe.”

THE PUBLIC REVIEW – ★★★★★
“James Loveridge brought out some of the shock and awe – all with a smile on his face, too – you would expect from on-the-edge stand up.”

THE SKINNY – ★★★★
“He had the rest of us in stitches throughout a polished yet ever-evolving act, with asides and quips just as strong his actual jokes.”

EDFRINGE REVIEW – ★★★★
“James is an animated storyteller; an entertainer. His jokes and asides are self-deprecating and sharp, and delivered in such a manner that makes it difficult not to laugh along.”

ARTS AWARD VOICE – ★★★★
“Super-confident… He did impart us to a great trick for a Facebook sabotage which got the biggest laugh of the show.”

HERDMU.COM
“Undeniably great …you are automatically drawn to his inexplicable way of storytelling that gets you doubled over laughing in seconds.”

THREE WEEKS
“His tales of provincial misadventure are by far the funniest parts of his set, delivered with witty self-deprecation and perfect timing.”

WHAT’S ON LONDON
“A thoroughly enjoyable storyteller and a charismatic self-deprecator, James treated the audience like a roomful of friends. Interacting with as many people as he could, he entertained the crowd brilliantly between acts and threaded the evening with a real sense of warmth.”

Tickets booked online must be collected 15mins before showtime. Cash tickets are available for 30 mins at the box office.
Over 18’s only, limited access for people with disabilities, no admittance for latecomers.